Underneath the Northern Lights

A unique assembly of sprawling lakes that lie under the stunning Aurora Borealis in northeast Alberta; this is the area that Northern Lights Public Schools calls home.

From the larger hubs of Bonnyville, Cold Lake, and Lac La Biche to the smaller communities of Wandering River, Glendon, Kikino Métis Settlement, and more, Northern Lights consists of 27 schools widely dispersed over a geographic area of 14,800 square kilometres.

We have 6,000 students enrolled in schools throughout the Division for the 2017-2018 school year, and we offer a wide range of programs to accommodate all kinds of students and parents, including preschool, out of school care, and the Trades Exposure Program. 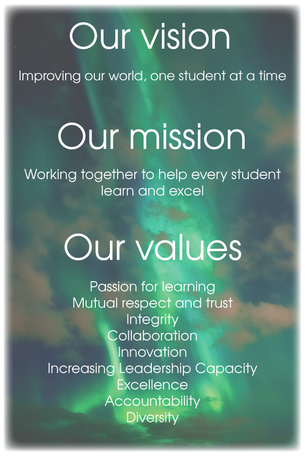 A History of Excellence

Formed on January 1, 1995 through the merging of Lac La Biche School District and Lakeland Public School Division, Northern Lights has always had a history of excellence in scholastics, citizenship, and innovation.

In 2001, Northern Lights won the Alberta School Boards’ Association Premier’s Award for School Board Innovation and Excellence for its literacy programs. The Division was chosen as a finalist for the same award for its Métis Culture and Heritage Project at Caslan School in 2004, and for its Student Leadership & Global Awareness Project that operated throughout the Division in 2008. Northern Lights was also part of the Success in Schools for Children and Youth In Care: Provincial Protocol Framework, which won a Silver Level Premier’s Award of Excellence in 2011.

In addition to the goals set for the division by Alberta Education, Northern Lights School Division’s 2015-2018 Three-Year Education Plan includes three goals specific to Northern Lights that we will be focusing on:

Our Three-Year Education Plan goals are to improve literacy and numeracy competencies; to improve communication, engagement and partnerships; and to support programs which promote a healthy lifestyle and sound mental health.